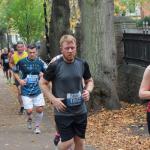 As you can see from the picture, running is tough! Thankfully, fundraising for the British Heart Foundation can be done in other ways too and has been by our staff member, Nick Shepherd.

The most recent fundraising effort has been a charity raffle at the Old Aylestone Social Club in Leicester, organised by Nick and his family. A range of prizes including an illuminated Leicester City Football Club wall plaque generously made by a close friend of Nick’s was offered on the night. Nick and his family and friends have managed to raise an astonishing £1,246 in one night towards a £5,000 target for the British Heart Foundation.

For our part, we helped Nick with the raffle by printing some raffle labels on the digital press. These were perforated through the centre so Nick could retain the buyer’s details for the draw. The labels also included a link to Nick’s Just Giving page.

Nick Shepherd joined the company 6 years ago after being recommended to us by a friend. He has been a fantastic and reliable team member throughout. Nick (“Shep”) is a keen runner these days having taken up the sport in 2016 after events a couple of years ago. He now has set himself the target of running the London Marathon 2018 for the British Heart Foundation.

He hasn’t always been a runner though and fell into the sport after a life changing game of football back in 2015. A keen Leicester City supporter, his sport of choice was always football and he played throughout his childhood and regularly up until October 2015 when things changed for him dramatically. 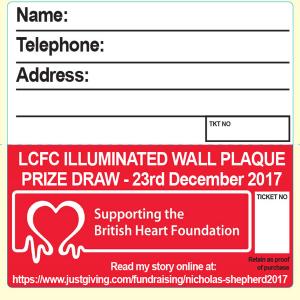 Nick was playing in a local football game when he got a “bit of heartburn” as he describes it. This heartburn persisted to the point Nick asked the coach for him to be substituted. Once back in the changing room, the “heartburn” would not subside. The coach was with him and grew concerned that all was not as it seemed and things looked more serious than they appeared. It became apparent that medical care was needed so his coach called for an ambulance.

Despite being only 34 at the time and having always exercised and maintained his weight, the staff at the A&E diagnosed he had a heart attack. The shock was immense. Staff referred him to the Glenfield Hospital where he received the world class treatment it is renowned for. A stent was fitted to fix Shep’s heart – not that we thought there was anything wrong with it! He was kept in for observation and treatment and released 2 weeks later.

Nick took up running as a replacement for football and started training in 2015. A series of events have been entered since including running the Loughborough Half Marathon in April this year for the Heart Link Children’s Charity which raised £1,733 via Just Giving. Nick has been raising money for the British Heart Foundation at all his events and has now started his campaign for the Virgin London Marathon 2018.

Commenting on the treatment, Shep said:

The staff at the Glenfield Hospital were fantastic and the support provided by the British Heart Foundation was amazing. Words cannot express the gratitude I have for the staff who looked after me and saw me back on my feet. My family were amazing too and provided so much support for me.

After seeing the effort and dedication of the staff and the impact on my family, I was determined to do something positive about what had happened. It started as a need to keep fit to keep myself healthy. I binned the fags and got running.

I decided to do something for the organisations that had helped me so decided to fund raise for them. Running is one part of that and with the help of my family and friends, we have come up with other ways to get money raised for both the BHF and the Heartlink charity. This raffle night is one part of what I am doing toward my £5,000 target.